How to produce corn starch ? 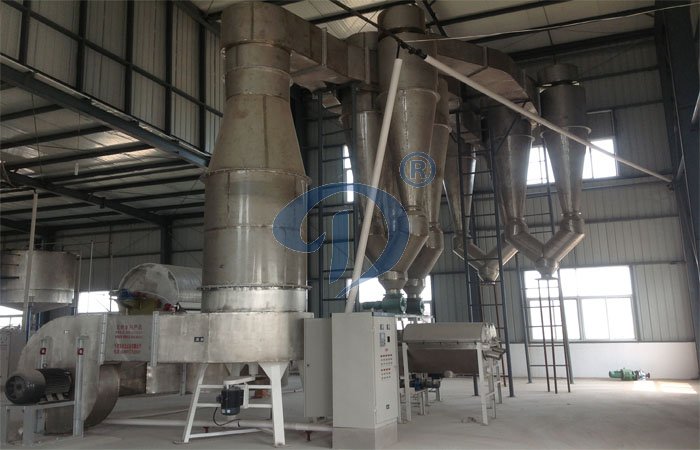 Corn starch usually is refined by a process called wet-milling. This refining process breaks down the corn's kernel then the endosperm to result in pure starch. It's a complex process that uses specialized equipment to extract and dry the starch. This product isn't a good candidate for a homemade version.
Corn starch Basics
Dent corn, also called "field corn," contains hard and soft starch. This is the corn variety usually used for making corn starch. Although corn starch is called "corn flour" in the U.K, Australia and New Zealand, in the U.S., corn flour is a separate product from corn starch. Corn starch is used extensively in processed foods and in cooking and baking. Corn starch also has many utilitarian and industrial applications.
Corn Preparation
When the corn arrives at the processing plant, processors inspect it, husk it, separate the kernels from the cobs and wash them. Processors may store the kernels and clean them again. The kernels are the seeds of the corn plant. They're made up of the hull, the germ and the endosperm. The hull is the outer part. The germ contains the oil often refined into corn oil or used in livestock feed. The endosperm contains protein and starch to provide energy for the seed to germinate.
Beginning of Refinement
The corn kernels soak in huge tanks of hot water with acid and sulfur dioxide as preservatives for 20 to 48 hours. The steeping causes fermentation and softens the kernels. Milling crushes the grain, turning it into a paste. The hulls and endosperm are heavier than the the corn germ, so the germ gets skimmed off the top. The wet mass flows through a screen that removes the corn hulls. All that remains is the endosperm in the form of a slurry. High-speed centrifuges or hydrocyclones and washing remove the lighter protein from the starch, resulting in pure starch.
Box and Dry
Corn starch manufacturers wash the resulting pure starch then dry it. The drying process generally involves removing moisture by vacuum dehydrator followed by flash drying machine , which quickly removes all the moisture. The dry starch seive make dry corn starch into a super-fine powder or to the preferred specifications of the buyer. For food use, manufacturers package corn starch in packaging that helps protect it from moisture.